It took 10 years to raise the funds for its restoration, but parishioners of St. Anne’s Church in Tecumseh, Ontario, had faith that its steeple would eventually be repaired and reattached. Last week, their prayers were answered, and the cupola and spire were lifted from the front lawn onto the church’s newly restored tower.
To repair the 144-year-old church, the congregation had raised $1.7 million, and a local businessman and benefactor donated $2.5 million for the project last year. Not only would these additional funds be enough to restore the steeple, but the church’s exterior walls, HVAC system, restrooms, parking lots, and roof were also either replaced or improved.
The cupola restoration included stripping off the galvanized steel, repairing and reinforcing the sub-surface wood, and recladding the structure with a lead-coated copper that will never require painting or maintenance. The exterior stucco and mortar that was applied in 1918 was also stripped down to the original red brick. The brick was then reinforced with steel rods and plates.

In 2007, the spire was removed because of wood rot. Following the restoration, the tower top has been rebuilt with a poured concrete slab, and the spire will now sit on 12 steel columns rather than wooden pegs. 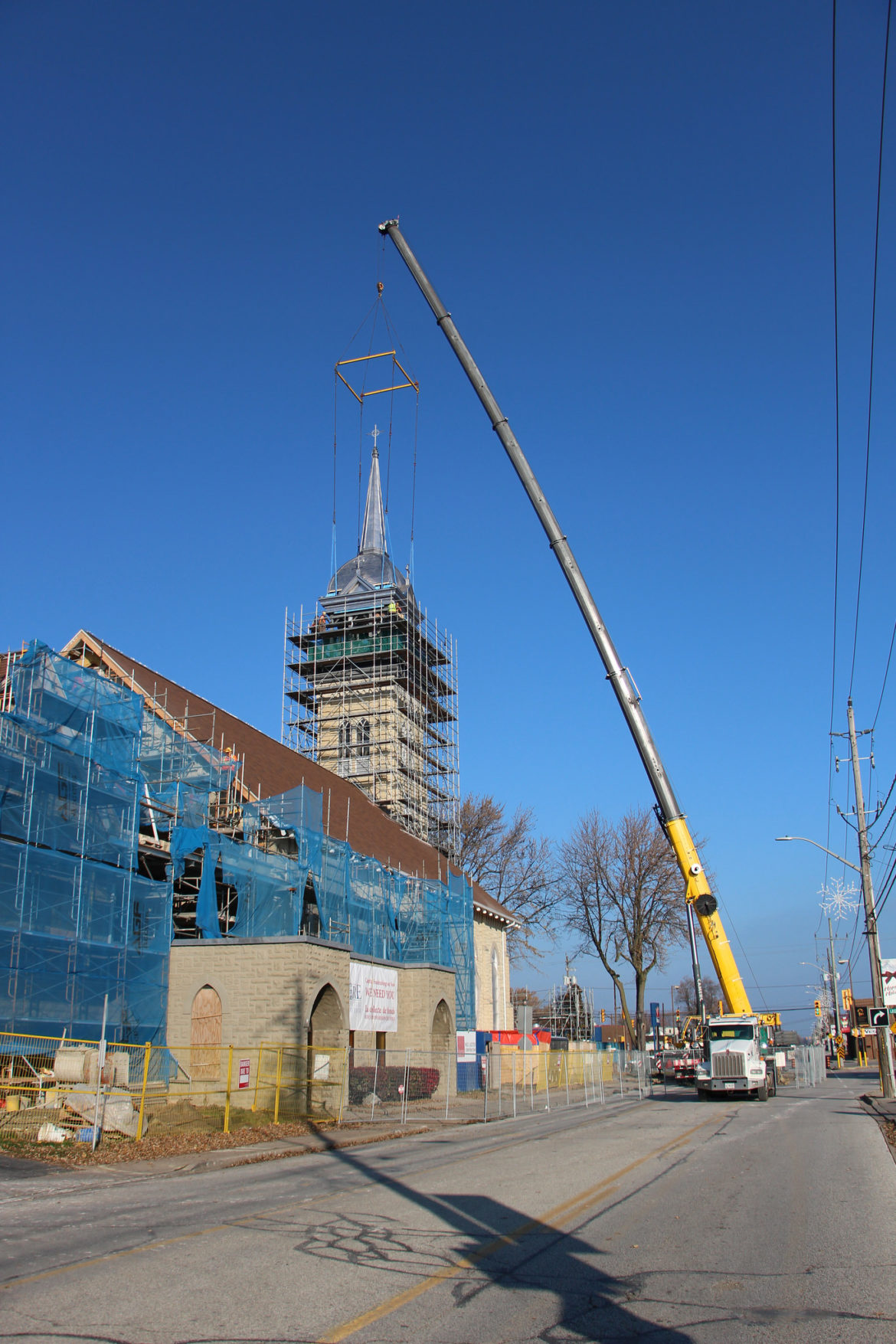 Windsor, Ontario-based W.D Lester led the construction of the project, and it hired Cameron Crane & Riggers Inc., London, Ontario, to perform the steeple lift. David Palsa, the principal operator on the 350-Ton (U.S.) Grove GMK6300L all-terrain crane and union steward for IUOE Local 793, used to lift the cupola and spire. He was assisted by Mike Smith, a third-year apprentice with IUOE Local 793.
The crane was set up the day before the pick, which required the crew to be cognizant of the power lines near the church. The crane also had to be equipped with a red light, and the neighboring airport was informed of the lift because it was working within the restricted air zone.
“We arrived bright and early because we didn’t want wind to be a factor,” Palsa said. “Usually, it gets windier around noon.” 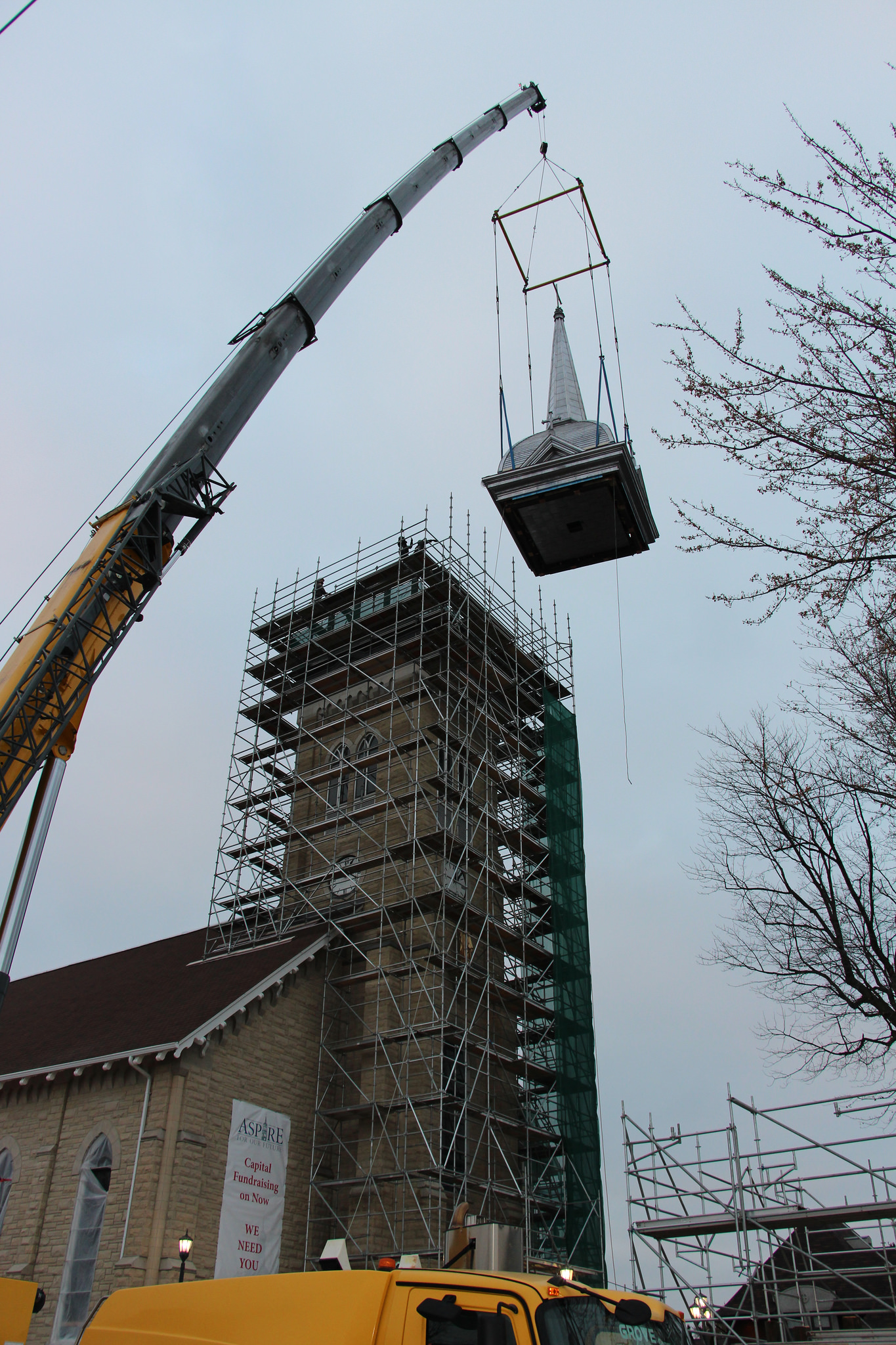 Working at a 75-foot radius, the Grove GMK6300L was configured with a 226.7-foot main boom, a single sheave block with two parts of line, and 78,200 lbs. of counterweight. The net weight of the load was 28,000 pounds. “It was about 50 feet tall and was being set on the main tower in front of the church, which was approximately 115 feet tall,” Palsa said.
To lift the cupola and spire, a 14-foot by 14-foot spreader bar box was built. Attached to the spreader bars were four 20-foot, 1.5-inch steel chokers. Four more 20-foot chokers attached to the shackles provided just over 40 feet of length.
Eight 20-foot Kevlar slings were then rigged through the roof of the cupola. There was two slings in each corner, and one was 8 inches longer than the other to make up the difference in the height of the two pick points. That was due to the different heights of the I-beams that the structure was placed on for the lift.
Palsa noted the challenge wasn’t in the crane work. “The biggest thing was that I had 200 parishioners standing by who had their heart and soul in this project, and it was priceless to them,” he said. “I wanted everything to go right because I didn’t want broken hearts. I wanted the show to go off just perfectly, and it did.”
GROVE GMK6300L CRANE RAISES CHURCH STEEPLE. We publish all the latest information from this industry. Read full news

Popular posts from this blog