Showing posts from March, 2018
Show All

Jekko has started shipping the second generation version of its six tonne SPK60.2 mini crawler crane. The first units have already shipped to customers in Hong Kong, Germany, Switzerland, Belgium, the UK and the United States. The SPK60 was launched two years ago at Bauma. The biggest change on the new model is a new software suite that extends the operational ability of the crane. It now has automatically selected load charts for working on slopes of 0.7, 1.5 and three degrees as well as level ground. The crane has extendable tracks and can Pick & Carry up to three tonnes. The boom and jib options remain the same with a 17.7 metre five section main boom, plus four section 8.27 metre telescopic luffing jib for a maximum tip height of 27 metres. Maximum radius with the jib is 19 metres, while it can luff down to 10 degrees below horizontal. A 7.3 metre telescopic swingaway extension with a capacity of 1,500kg, or a short 3.5 …
Post a comment
Read more 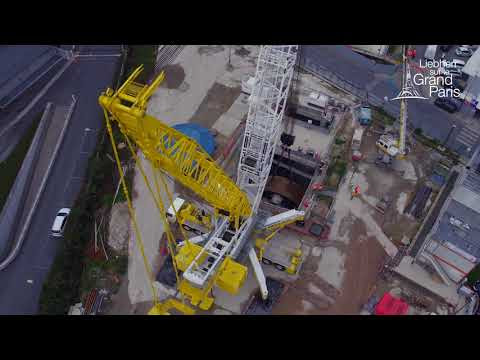 French crane contractor Mediaco has been using its recently purchased Liebherr LG 1750 lattice boom crane for work on the ‘Metropole du Grand Paris’ infrastructure modernisation project. According to Liebherr, the infrastructure project includes plans for 200 km of underground railway with 68 new stations.
The LG 1750 lattice boom crane has been used to hoist a tunnel drilling machine, and regularly lifts loads of around 300 tonnes, said Liebherr. The crane is generally equipped in compact form, with a 35 metre main boom and a derrick boom, Liebherr added.

The ‘Metropole du Grand Paris’ infrastructure project is expected to be carried out over several decades and will generate a lot of work for French contractors, Liebherr said. This is backed by Patrick Meublat, Mediaco’s technical director of the crane business. “Like all crane contractors in the Paris area, we are expecting a healthy rate of orders over the next few years,” M…
Post a comment
Read more

ALE goes it alone in Canada | Crane Plus

ALE goes it alone in Canada | Crane Plus:

ALE has ended its Canadian joint venture with Roll-Lift and established its own Canadian operation.
The company set up the joint venture with Roll-Lift Canada in 2012, and has operated as ALE Roll-Lift Canada since then.
It has now decided to move forward on its own, and says that it plans to focus more on large, long term projects in the country. Based in Edmonton, Alberta, it also has branches in Calgary, Toronto and Montreal with a specialist team of experts and project managers.
ALE Canada president Bas Bronder said: “Over the last five years the joint venture has played a strategic role in establishing the ALE name in the competitive Canadian heavy lift market. We recognise the potential opportunities within the country and are excited to offer ALE’s services. With dedicated offices across Canada, we can not only increase our presence nationwide, but demonstrate our continued commitment and enhance our overall service offering to our loca…
Post a comment
Read more
More posts